To give you a flavour of the weekend, read the stories participants want to tell!

Hi May,
Thank you for your phone call on Monday and this email today enquiring after my health. The healing I've ben told will be slow but sure. I'm still in a lot of pain and limited to what I can do, but hey ho I'm breathing!! and here to tell the story of a wonderful weekend. Just need to take it easy and not move too quickly, also to take the painkillers. Gutted at the injury sustained from such a slow and low fall.
I would like to congratulate you and all your team of Merry Helpers for the GREAT weekend I've just had being involved with the Coast2Coast event.  From the moment of arriving in Bonar Bridge on the Saturday...   Read on

On the weekend of 10th May 2014, 6 members of Moray Coast Vet Group took part in the 19th Annual Coast to Coast Trek in aid of MacMillan Cancer Support. The event first took place in 1996, organised by May Gilchrist, and has become a regular event since then. A few members of Moray Coast Vet Group have participated in previous years, but this year 6 of us took up the challenge. Read more ...

The first day’s walk he completed without problem. He enjoyed his brief repast in the Bridge Hotel
and his night's stopover in Ullapool.
The second day he ate a very hearty breakfast in the morning and was happy to get going.
Although the weather was somewhat inclement, with heavy and wintry showers he plodded along beside me quietly.
Towards the end he had a few whines and moans but he completed the walk, had a drink, got on the minibus
and promptly fell asleep.

“He” is my ten-year-old Grandson Ellis, he did very well and I am very, very proud of him.

If he can do it so can you.

He had been on several walks with me.
He had done the Macmillan Spey side walk with me.
He had done the six harbour walk and climbed Ben Nevis with me – and now it was time for the big one.
The 36 mile Ullapool to Bonar Bridge.
The first day he managed without any problem.
On the 2nd day he enjoyed a hearty breakfast  and set off for the longer walk of 22 miles.
Although the weather was inclement with lots of wintery showers,
he walked without any problems.
He managed to finish and after a drink, he got on the bus and fell asleep.
"He" is my Grandad and he is 65, I am very, very proud of him.

It was a brilliant weekend!

Bonar Bridge on Saturday morning threatened rain.  Should I be silly and cycle the road route to Ullapool?  Given how unfit I was it was an easy decision to go for a relaxed cycle and cover the route from Croik church.  Basking in sunshine I took it easy up the slight hill in Ardgay.  My heart went into an arrhythmia.  Hmmm.  My long standing heart condition could be a problem over the weekend.  If it played up on the Sunday I would just need to go slowly and if needed take all day.  Slowly I addressed my fears for tomorrow and relaxed.  For today I could just take my time, enjoy being out.  The trees were just beginning to leaf.  The stump from a felled birch was flowing with sap, something it really should have done a month ago.  Following the road on the south side of the Carron to its end I stopped for a chat with a local shepherd, spending half an hour putting the world to rights.

NO BITING OR KICKING, PLEASE 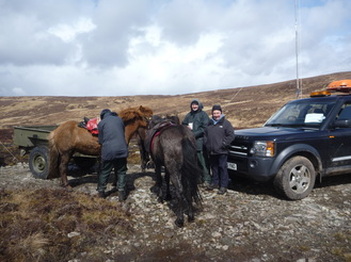 Eventually! The bright (and dry) Scout tent, and the idea of a hot cup of soup was a welcome sight for us weary riders... Because the event is so early in the year, and there had not been a chance to get the horses fit, we undertook the ride with 2 hand-horses, so that we could switch mounts for the second stage on Sunday. Once we had crossed the river, we huddled behind the tent to keep out of the wind. One of us had 4 horses to hold on to, the other would bring the soup, and the coffee, and the chocolate, and some carrots. (THANK YOU SO MUCH!)
Then it was time to change the saddles, check that horses, and all the equipment were sound and safe. Not knowing any better, I asked a very friendly bystander if he would mind holding onto 'a horse'. He smiled, hesitated slightly, and then stretched out his hand. I was going easy on him, and initially only gave him two horses to hold onto. But as all seemed well, I soon handed over the other two as well. His smile got bigger and bigger, as he told his friend: "This is the first time in my life that I have anything to do with horses who do not bite, or kick me." Well done! And thank you for being willing to help with all four of them. That must have taken some guts!
Gundula, May 2013

As in previous years, Paul was the vet in attendance of the 2013 coast to coast event. So about 5 miles into our ride on Saturday,  we met this very polite cyclist and his lovely black labrador - who were both just in time to open a gate for us. We thanked him politely and were ready to move on, when May called out: "Is that you Paul? I only recognized the dog!" And indeed - much to our amusement - this turned out to be Paul, having just cycled over from Bonar Bridge.
Sunday morning in the dining room, we surveyed people eating their breakfast. Some friendly faces, some who we had chatted to the previous evening, some we had noticed in passing  - but Paul did not seem to be amongst them... 15 mins later, and we are on our way to the car, who should appear with his bike - but Paul & his dog. I instantly realised that I had indeed spotted him in the dining room, and not recognised him either.  - So Paul, if you want to be seen, make sure you are in the company of your dog!
Gundula, April 2013
Powered by